Posted on October 16, 2013 by daughtersisterwifeandmom

I’m trying to do a bit of organizing and purging (you know, in the 20 minutes a day you have when naps are happening, after you have showered, done laundry, and eaten), and came across a wonderful bio of my Dad, Rich (Wilbert) Richardson.  Words can’t describe what my Dad meant to me and to my family, and for those who never met him, this is a fantastic ‘overview’ of the man he was.  The biography was written by Maria Goldblatt, and to this day I thank her for using my Dad as the topic for her Global Entrepreneurial Management assignment, as it allowed his journey to be documented.

It is a long read, but one hell of a good story. I’ve broken it up into manageable parts. Enjoy.

Time was nearing to pull the trigger on the Shotgun Clause.  The Shotgun Clause was in the contract.  It stipulated that if Bill was unhappy with the union, he could offer to buy RIch out, or vice versa.  The partner receiving the offer was able, if he so desired, to accept the offer OR to buy the other fellow out at the same offer price.  The offer was a lot of money.  And Bill was his usual arrogant self, scheming with his NJ backers, oblivious to Rich’s work behind the scenes.

The day finally arrived some weeks later.  It was a Wednesday – the day that Bill chose to serve Rich with the offer.  Rich knew it was the day.  He was prepared.  He came in early before bill arrived and fired all the salespeople who had sided with Bill.  The keys to their BMWs heaped on his desk.  He called his Banker to finalize funding, grabbed a cup of coffee and turned his chair toward the window, opening the shade.  He waited.  It would not be long now.  He watched as Bill parked, grabbed a thick manila folder from the passenger seat of his car and strode toward the office door.  Rich swung his chair around to face the door and took another swig from his mug.  He waited.

“Where is everyone this morning?” Bill called out making his way down the hall.  “Was last night at the clubs so rough no one could get in on time?”  He chuckled at his wit expecting others to join in but only silence.  No one answered his comment.  Only two offices were occupied and the men sitting there did not even look out.  Bill shrugged and headed in to see Rich, still carrying his folder.  “Rich – good day.  Glad you are here because I wanted to chat.”

“Come in.  Come in.” “What’s up partner?” Rich crooned motioning Bill toward the little conference table in the corner of the office, then joining him there.  Bill spared any obligatory niceties throwing open his folder, “Rich, I am buying you out of the business today.”

“What is the offer?” Rich asked coolly, although he already knew.  Bill handed Rich the document with the flourish stating the figure with pomp.  As Rich bent his head to read the document, Bill glanced around.  His peripheral vision caught sight of the pile of BMW keys on Rich’s desk.  His eyebrows raised and eyes opened wide.  He glanced slowly over his shoulder out the door.  Still no sales staff in the halls.  No usual sound of activity.  “Aaaah, what is going on here?”  Bill stammered, turning quite white.

“Well” Rich said, “Actually, I am buying you out of the business today.”  “I match your offer as per the Shotgun Clause.  Here is the paperwork for you to sign so please do so then if you wouldn’t mind, please leave my office.” My lawyer will call yours.

Bill slinked out the door.  Rich shook his head then reached for his rolodex.  “Need to find a new sales force:, he mumbled as he reached for a number.  He decided to outsource.  It was a business philosophy of his, he told the company on the phone, “I am a great believer in minimizing overhead.  If we can outsource the service we need, that’s what we’ll do.” And that’s what he did.

The company remained Dodd and Richardson until 1983 when Rich invited Southam Printing to buy part of the business.  Earnings had leveled off and even decreased in some sectors.  From a high of $15 or even $18 earned for cost per thousand at the onset, the early 80’s brought earnings of closer to $3.  Rich decided that it was time to gain an advantage by providing customers with a more complete solution.

The new company formed was named SMR, short for Southam, Morris, Richardson.  It produced the co-op advertising envelope and did all the targeted insertions.  When new executives came on board at Southam Printing in 1988, they decided to sell off SMR believing it to be outside core competency.  Rich bout the shares then immediately sold to Telemedia Procom uniting the front-end of the business with the contract for inserting material into the actual envelope.

By 1996, technology had changed the face of the industry.  Not one to miss new trends, Rich merged SMR with a struggling bindery operation owned by Bob Tier.  The company became SMR/Tytrek.  Rich became Chairman.  It was the first company in all of Canada to have all the disciplines for direct marketing programs under one roof.

In 2000, the partners bought Rich out.  It was time.  How different was the company left that day from the foundation that he had laid so many years ago with Wayne Distributors and Advertising – one truck and a better way of doing things.  As the partners and his colleagues warmly toasted him, they recalled his many successes.  The Champagne poured freely.  The waiters circulated with silver trays displaying tiny delicacies.  The speakers told of Rich’s contributions, awards and honours.  The crowd applauded.  An article in Direct Marketing News called him ‘a trailblazer in the direct marketing industry’.  He was.  And he is. 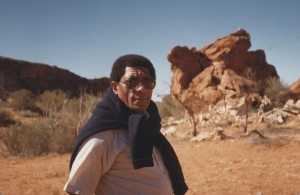 Rich was ready to move on from the SMR Group.  But retire?  Never.  He simply needed time to work on new endeavors.  He wanted to put more focus on giving something back through the education foundation he had started to help at risk youth.  And he wanted to spend more time on the black minority-ownership business he recently formed in the US, the LGR Group.  The LGR Group’s genesis was in mixing old and new contacts from his proven network.  HE worked it the same way he had done so many deals, by putting the right people together, relying on others input and finding unique solutions to problems.  Kirk Lewis – his old football buddy from Pennsylvania – had a son working in Michigan on minority marketing.  Rich joined up with him and another partner and LGR was born.  Sharing shares in the business as was his way.

LGR was doing work with Mercedes-Benz, USA.  The President of Mercedes-Benz had once lived in the same neighbourhood in Canada as the Richardson family.  Rich used this contact to meet with the executive team and fill their need for highly targeted customer relationship marketing campaigns.

There is no end in sight for Rich with another business plan underway targeting the swelling number of aging baby boomers.  And the legacy of entrepreneurship continues.  Daughter Amber is 25.  She has her Dad’s unquenchable vitality, ambition and knack for networking.  And she has her Dad. 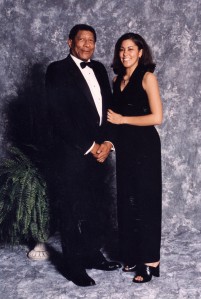 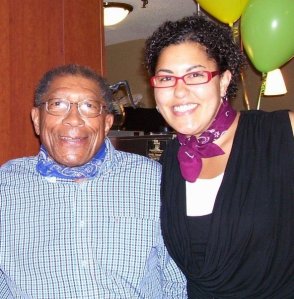 I met Rich because of his work with Mercedes-Benz.  LGR was the agency for a highly successful program that we launched November 2002.  And so that is how I came to know him and how I ultimately came to interview him.  IT is a privilege to have had the chance to record this snapshot of his remarkable life.  when I asked him if I could interview him, he suggested that we meet at the Devon Horse Show because it is closer for me coming from New York and all.

Prue’s pony won Champion that day at the Devon Horse Show.  Northwind Farm, they announced.  Rich told me Prue was doing very well with her business.  She is a successful entrepreneur in her own right.  During high season, she is on the go with a ferocious schedule.  Rich stays out of her business and out of her way when she is working.  He did introduce me to Prue when I arrived at the Show.  She shook my hand and said hello then wisped a little nothing from Rich’s cheek before we moved on.  It was easy to see how they treasured one another with a radiant connection.  As an aside, Rich told me during a later conversation that he and Prue had dinner one of the nights of the show with a woman interested in one of Prue’s horses.  The woman remarked to Prue, referring to Rich, “You are very nice to your truck driver!” (obviously not knowing they were married). Prue quipped, “He has been with me for a long time and he works hard.”

From Rich, I learned the power of networking, the need to share risk, the importance to always, always look for the unique idea and to act fast.  I saw the success in staying of of sight and striking when it was least expected and the value of peace of mind.  He chalked much of his success to luck which is an interesting way to look at things.  For me, it points to humility which ties into the continuous search for a better way.

For my own plans, Rich gave me some advice which I have been turning over in my mind. “Do you have any extra time? Get started today. Start pulling together and mapping out a plan.  No one has to know what you do.”  He is right.  Why not start planning sooner? Why not.  And he told me to be patient.  I wrote it – the word patient – on an 81/2 x 11 piece of paper in green marker and posted it in my office to remind myself.  I tend not to be.  I tend to be preemptive.  The word reminds me to pace myself and to more vigilantly search for “luck”.

Impressive man.  Impressive story.  Wonderful family.  A privilege for me.

It goes without saying that I can’t thank Maria enough for documenting this snippet of my father’s life story.  Due to all the positive feedback on this series of posts, I am thrilled to be able to continue to share stories about my Dad’s life.  Stories that you quite honestly will find hard to believe.   You see, my father was like the main character in the movie, Big Fish.  He taught Royalty to dance, he was part of an undercover mission, and he had friends in crazy places.  Thank you for supporting my blog and I look forward to sharing many more stories with each and every one of you. 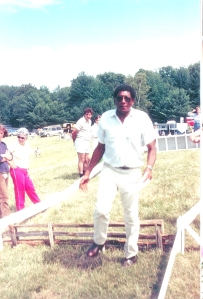 This entry was posted in Daughter, Family. Bookmark the permalink.